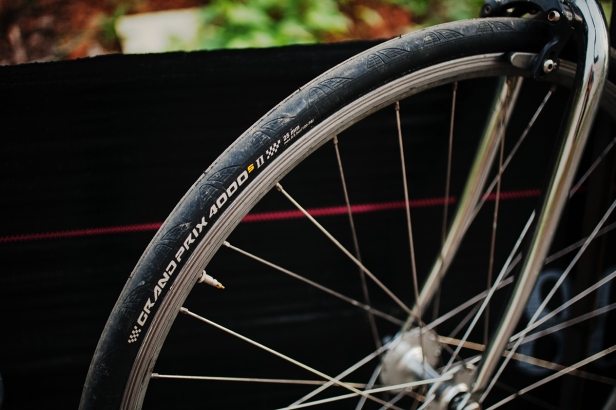 The Quickest and Stickiest Rubber You Can Buy for the Road

You can just keep moving on, we’ve seen all the reviews about how great this tire is, but hey, if you have a couple minutes, stay on my page and read my experiences with it too.  This is coming from an avid commuter and lay-man bicyclist that just enjoys going as fast as I can or as slow as I want.  I’m a city cyclist with an occasional taste for the finer things in life, sometimes I like to use what the pros use and the Continental GP4000s ii is one of those items.  Now that they supposedly fixed the “1000 mile blow out” problem of the version I, this is even more reason for me to use them.  The version 2’s are exactly the same the version 1’s.  The only difference now are the new color options and sizes.  With the version 1’s, the tires had to be all black.  It was the only way Continental could get the black chili compound in there.  But now they’ve figured out how to include Black Chili and make the tires in different colored trims.  This isn’t a big deal for me, but for people who wanted a 700×28 tire, they have that option now.

Is this tire overkill for my needs? Probably, but if I’m going to be biking over a thousand miles on my bike a year, I think safety and comfort are worth the $100.  I’d rather buy the best that I can afford when it comes to tires.  Like cars, you can’t skimp on tires because they’re the only things touching the road.

The GP4000s ii is the 2nd version of the acclaimed GP4000s I.  Both tires have the special black chili compound mixed in which gives the rubber a really soft and tacky feel to it.  This tire throws up all sorts of debris when it goes over small rocks or when I’m riding in the gutter, the rubber just latches onto whatever touches.  I have ridden through heavy rains without fail for over 800 miles so far except for a flat in the rear tire.  That was mainly my fault caused by riding through an awfully large mound of broken glass just to see how well these tires would hold up in wet conditions.  As great as the GP4000s II is, it’s not quite up to snuff as the Gatorskins or 4Seasons when it comes to rear puncture protection.  Because of that I changed my rear tire to a Gatorskin Ultra to withstand the extra weight since I usually ride with about 15 lbs of stuff on my back.

I have leaned heavily into corners on slick cement (as far as a Bianchi Pista can let me lean, which is a a lot since it has a really high bottom bracket) without fail or feeling skiddish in the rear.  The tires roll very smoothly and I can definitely feel a difference when starting from a stop.  As far as the bike feeling faster overall, I doubt there is much difference.  You’d have to get much lighter wheels or just work up your cadence and muscles if you want to go faster.

The GP4000s ii on the front holds up very through extremely poor road conditions, light pavement gravel, small rocks, pebbles, craters, bumps and the occasional piece of glass and metal.  I would be extra careful on the rear if you using these.  There’s a nice amount of protection in the middle of the tire with Conti’s Vectran belt and I’ve ridden 800 miles before i got a flat in the rear, but still this tire should last a lot more than 800 miles.  I am also quite light at only 155lbs.  If you’re over 200lbs and riding with back full of gear than perhaps some 700x28s would be in order instead or at least a tire with a bit more protection.  If you’re heavier and want to stay with the 23 or 25s, then you should be a a litte cautious going over too much debris and try to the stay on the smoother parts of the road.  If you’re using this mainly on bike trails then you should be ok either way.

People have complained that the rubber is softer and that it wears a bit faster in the GP4000s i & ii, but for the performance, it’s something that I can live with.  If you’re a “i don’t need your opinion, I need hard facts” kind of guy, than check out Slowtwitch’s in depth data analysis of the GP4000s ii’s rolling resistance and power needed to propel, compared to other tires.